David Frum had a good piece on the special elections in New York, Virginia and New Jersey, from which an important quote should be observed:

“And if the Republicans pick up an Arkansas Senate seat and a dozen blue-dog Democratic House seats in 2010, you can see this “tea party” mentality taking strong hold of the GOP in the run-up to 2012. But a political formula that encourages Republicans to write off the suburbs, the Northeast, and California is not a formula for a national majority. It’s a formula for a more coherent, better mobilized, but perpetually minority party.”

I, for one, have never been a fan of zero-tolerance policies. They remove human intelligence and judgement from the equation and treat similar circumstances as though they were exactly the same. That is not reality. Every situation has its own set of circumstances which must be considered and weighed. Something we could use less of in our society is knee-jerk reactions that attempt to solve problems with swift, broad strokes, leaving the collateral damage to be cleaned up by someone else down the line.

Conservatives who hope to change the direction of politics in 2010 by booting out the moderates and rallying around the campaigns of “true” conservatives ought to stop and think before they act. 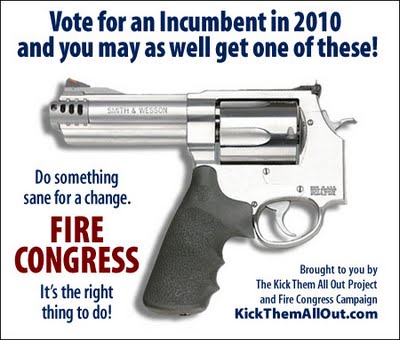 I’ve seen these kinds of images on signs and stickers lately, calling for us to “fire congress” or “re-elect no one.” The irony of this particular advertisement is that people who actually listen to this are already shooting themselves. For those of you who are offended because you have supported merchandise like this, give me a moment to explain. It is better to understand the truth and get results than to run blindly and stumble.

A German Prussian politician, Otto Von Bismarck, once said, “Politics is the art of the possible.” As abstract that may sound to many, it alludes to a sobering reality: thanks to the many competing interests in society, very few of us will ever have exactly what we want. The best we can hope for is that we can manage to build enough consensus on the things we can agree upon in order to push through at least some of the things we want. The next time you hear someone complain that we only have two major parties, ask them how they plan to have any influence upon legislation with less than 50% of the vote.

While lots of passion, principle and great ideas sound like characteristics for the ideal politico, in actuality such a person can do very little without the support of others. The founders had this in mind when they created the Congress. They wanted to make sure that one person, or one small group could not have an influence on the whole country. This makes sure that most of our laws are supported by most Americans. In the Senate, the vote on whether to even hear a bill on the floor must be unanimous.

If the realm of “possibility” is the one to which we are confined, then we must prepare for a degree of concession to those whose goals are slightly different than our own. This is not a betrayal of one’s principles, it is merely “the art of the possible.”

Am I saying that the GOP should claim a more moderate position and endorse center-right candidates? Not at all. As Florida Senate candidate Marco Rubio said on “The Morning Joe” today, “for Americans that want more government involvement in the economy, they already have an option on election day.” Republicans must advocate the alternative view and present it in a way that provides clear choices to the American people. But the idea that we have to remove any person that doesn’t completely support our specific platform, like some sort of party cleansing, is only going to shift majority power the other way. How can conservatives point to factions within the Democratic Party that have already weakened this administrations effectiveness, yet not see the speck in their own eye.

We should also consider that the current congressional incumbents are there for one reason: the people of their district voted for them – usually more than once. Since districts are typically drawn to favor a certain party, “firing” congress to put in a fresh batch doesn’t mean that you’re going to get a different ideological make up. It only means that there will an inexperienced but zealous conservative minority, vying for attention from a professional and well-networked Democrat majority.

If alarmed conservatives oust moderate Republican incumbents in favor of hard-right conservatives they risk splitting their own voting bloc in two, giving Democrats a seat in a majority Republican district. The way to make your voice known is to speak up early, vote in primaries, and promote your cause in the off-season, but once your party’s candidate is chosen, the game play must shift toward a team win, because a loss for your team is a loss for your cause.

Obama owes his presidency to “Independents” – a group made up largely of people who really aren’t that interested in politics. And if a Republican wins office in 2012 or 2016, as a result of his inability to fix all of Americas problems as he said he could do, it will likely be these same individuals who put them there. They don’t want a watered-down message, but they don’t want extremists either. They just want someone with solutions that make more sense than the other guy. I believe that conservatives have the right solutions, they just have to be able to communicate them effectively.

The Mayoral race in Houston includes only one “true” conservative. He believes in limited government and fiscal responsibility, but in all fairness has no business running the fourth largest city in the U.S., with the second largest port in the world. He doesn’t belong and everyone can see it. The other candidates are more qualified, have better funding and are much further ahead in the polls. Though it is a sure bet that he will lose the race, he may also keep us from electing at least a moderate Democrat. It would be far better for him to pull out and declare support for one of the other candidates. If Ron Paul had pulled out of the primaries in 2008 and put his support behind Romney or Huckabee perhaps we would have run someone against Obama who could actually provide a challenge.

It is important for us to consider exactly what we want in our society and why we want it. We should be vocal about it and be active participants in our communities. True change comes from the bottom up. But we also have to be sensitive to the needs and wants of others, and understand that sometimes we have to give a little to take a little. I don’t believe in putting party before principle, but I do believe in cooperation. I understand that my desire to not “play” politics only gives advantage to others who will. The game will be played, and we are a part of it whether we like that fact or not. We can build consensus and have an influence on our future, or we can hand the ball to someone else as we shout from the sidelines.