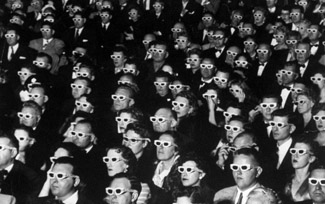 As any other kid from a lower-class family did in the early 90’s, I frequented the bowling alleys, skating rinks, and yes… the Dollar Movies. Those were the days when Nintendo was in its infancy and Al Gore had yet to invent the internets. If you were bored you either went outside to goof around with neighborhood friends or you convinced your parents to drop you off somewhere with a few bucks.

If you’ve kept your eyes open you may have noticed some bowling alleys trying to reinvent themselves as a cool hang out, with neon balls and alcoholic drinks. Skating rinks were back on the public mind after Drew Barrymore’s recent flick, Whip It, though I’m not sure people are ready for a full comeback. What is ready, however, is the Dollar Movie, though it will be under a different name. Economists and entrepreneurs look at markets for opportunities, and this one’s so obvious it’s practically begging.

Dollar movies were popular back when a regular movie ticket ran for around $5. We’re looking at an 80% price difference. The discount theaters had to keep their costs down in order to operate, which was partially done through the lower cost they paid to studios by waiting a little longer to release. They also had to reduce operating costs, but they still managed to stay moderately clean and well staffed. As the cost of making the movies we like shot upward, and new theaters began sporting “stadium seating” average ticket prices went through the roof, and most of the dollar theaters went under or dramatically reduced their quality standards. I personally know of only one left in my city. It’s sound system is crap and its floors sit under a layer of petrified lysol and popcorn grease. Actually, it’s not even a dollar movie—tickets are $1.50—except for special days when they want to boost sales.

Standard-variety theaters have doubled their revenues since the dollar days. Indeed, just this year the average ticket price in the U.S. hit $10. During the first week about 90% of that goes to the movie studio (Pixar, Miramax, etc.) and the theater itself gets more of the cut the longer a movie sits on the reel. You might expect that after a few weeks the ticket price would go down, but no,… the movie goes straight from $10 to $1—the price tag offered at the increasingly popular Redbox kiosks. It’s no wonder fewer people are hitting the theaters. That’s a serious market gap.

It doesn’t take a stretch of the imagination to assume that a good deal of these people who are opting for the home video would really rather see it in the theater, but aren’t willing to shell out the $10. This is particularly true for twenty-somethings who A) have plenty of time to spend going out to the movies with friends, and B) do not have large screens and 5.1 surround sound in their apartments. I, for one, go to movies far less frequently than I’d like, and I never get around to renting most of them. This brings me to my point.

If I were a bettin’ man, which I am only occasionally, I would tell you that within the next few years discount theaters are going to start popping up across the country. Now that the stadium-styled theaters are aging and the cost of building them has long been recovered, there is opportunity for theaters to specialize in month-old films at half the price and immediately get an edge on their competitors.

For $5 per movie, a theater would pull customers from both the home-video industry and regular theaters. In fact, I would not be surprised if, in order to compete, regular theaters started lowering their price, or giving better deals on popcorn, or something. The simple fact is this: it’s getting really expensive to go out for dinner and a movie. It’s true for college kids, and it’s true for young couples, but it’s really true for the family of four who just wants to do something fun together.

I think there’s a real demand for affordable silver-screen entertainment, and the bubble is about to burst. Mark my words.