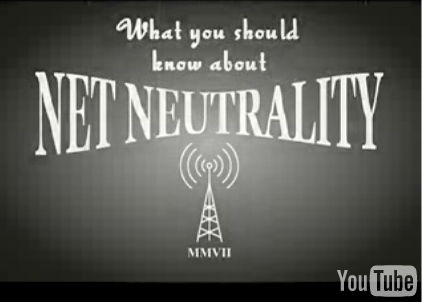 Smashingmagazine.com posted a great article in which the author espouses the benefits of a free and open internet, otherwise known as “Net Neutrality,” arguing that any law limiting that freedom would “shatter the core values that make the Internet so profoundly valuable to society.”

I couldn’t agree more. The internet has become an incredible tool for information, communication, trade, and practically anything else we can think of. And this has only been possible because millions of people with millions of ideas have been able to freely develop them, and the best ideas are allowed to spread quickly and easily. The internet allows us to create, and share our creations with as many people as possible, at whatever price we wish to charge. Miraculously, no one “governs” the internet. There is no global committee in charge of approving websites and what goes on them, or who is allowed to have access to what (outside of laws that overlap with the rest of the “real” world). Yet, the internet continues to grow and meet more of our every day needs in more efficient ways, through a voluntary and organic process.

Interestingly, this is exactly the argument those of us make who firmly advocate for the free and unfettered market, ostensibly guaranteed by the U.S. Constitution. 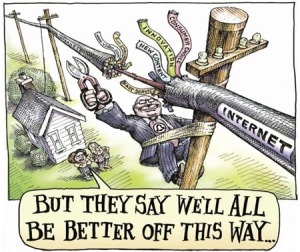 There are inevitably those who point to the fact that freedom allows people to cheat and harm—like creating viruses—and who step up to defend the “victims” of free-enterprise by calling for government action. In the tech world problems have been addressed through things like virus software and spam filters. And how much spam do you get today compared to 1999? The market solved it, though admittedly not without some casualties. As old problems are addressed, new ones are created, and because it’s impossible to foresee the next attack it’s impossible to prevent people from getting harmed.

But it doesn’t mean you shut the whole thing down, or put some ultimate decision-maker in charge of it. The internet is just too big to “plan”. Today, if a massive virus is discovered, every company in the tech industry puts their best resources into defeating it. A few clicks and phone calls to tech support later and the whole event is history. This is because each of those companies have a vested interest in keeping things squeaky clean. What might happen, though, if only the person “in charge” had the authority to deal with it? Problems would get so out of control and burdensome that most people would simply stop using the internet.

In such a state, the death of the internet wouldn’t be a huge loss anyway, since there would be far less to do with it. Imagine what might happen under a controlled web. Many companies would fail to get approval to operate a site at all, and others would decide that the new fees—oh yes, you can count on fees—aren’t worth it. Since companies operating through the web would have an “unfair” advantage over others, product sales would be taxed higher, turning even more companies away. And since the whole process of getting approval for, building and operating a website would require so much red tape and so many regulations, few individuals could afford to experiment with new ideas—certainly not free ones.

The next Wikipedia, Google, or Facebook would simply never happen. But people can’t miss what they never had. And they would count whatever inconvenience they did notice as the small cost of security and fairness.

Freedom is a two-sided coin. When you allow people to make their own choices you must take the good with the bad. Our knee-jerk reaction to bad decisions is to prevent them, usually through threat and regulation. And there is definitely cause for that approach in certain cases. But is there a better way to get better results? Yes. And does it require a central planning authority that grows larger with every new problem? Absolutely not. But this isn’t something that can be explained in a blog post.

Like language and currency, the internet has been created by people and for people, with no central controller. It’s not too often that humanity gets such an illustration of the raw ingenuity of the human spirit, and the power of free people acting independently, toward great social benefit. Yet, the internet provides a perfect learning opportunity for understanding how Capitalism results in better living, greater freedom, and more opportunity for all. Adam Smith would be very proud.

Over 14 years in marketing and design, agency and in-house, I’ve helped grow dozens of brands by combining business acumen and insights with creative storytelling and experience.

I was once kicked out of the studio by Beyoncé's producer for having a good idea.

I recorded my first album in the same studio where Frank Sinatra, David Bowie, Tom Petty, Weird Al, and others produced hit records.

It may be too soon to declare the desktop dead, but for marketers it may as well be. If you are still building digital marketing creative primarily for desktop, you’re likely […]